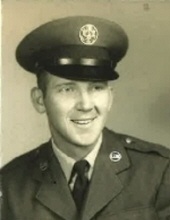 Larry McKelvey, 79 of Boston, VA passed away peacefully at the Culpeper on February 27, 2021. Larry was born and lived the first 19 years of his life on a farm in Cullman, AL. After graduating high school, he attended Alverson Draughn Business College in Birmingham, AL. He then entered the U.S. Air Force.
After serving in the Air Force for four years, he worked for the Federal government for 30 years, serving in embassies around the world, including India, Austria, Bangladesh, and Ghana. He also traveled to numerous other foreign countries on temporary duty status.
He is survived by his wife of 46 years, Shirley; a son, Patrick of Johnson, IA; a daughter, Cynthia Hill of Birmingham, AL; sister, Linda Hawkins of Cullman, AL; brothers, Ricky (Pamela) of Fayetteville, TN and Anthony of Cullman, AL. He will also be missed by three grandchildren.
Larry enjoyed gardening, hunting, and playing music. His passion was playing the upright (doghouse) bass. After retirement in his later years, he formed a bluegrass band (Stoneridge) and played for nursing homes, senior citizen facilities, festivals, family get-togethers, etc. He also played bass with the Flat Run Ramblers and at Shelva’s jam on Rt. 20 in Orange County every Thursday morning. He will surely be missed by his friends in those places.
A celebration of his life will be held at Moser Funeral Home in Warrenton, VA on March 4th, 2021 with a visitation at 5:00 pm and a funeral service to follow at 6:00 pm. His remains will be interred at the Simcoe Community Church Cemetery in Cullman, AL, on Saturday, March 13, 2021, at 1 p.m.
In lieu of flowers, please make a donation in Larry’s memory to the church or charity of your choice. Online condolences may be expressed at moserfuneralhome.com.

To order memorial trees or send flowers to the family in memory of Larry Hugo McKelvey, please visit our flower store.